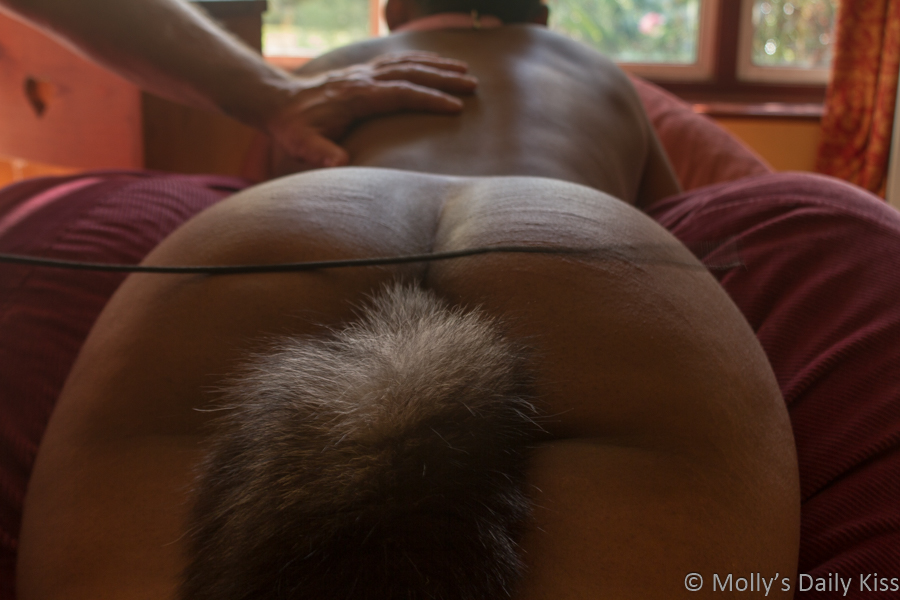 450 words and squeezes in KOTW

The new binder pushed his breasts down beneath his shirt, flattening his chest. He liked how he looked. Her hands smoothed down the front of the polo, making his nipples tighten hard. He watched in the mirror as she rubbed the spot the nubs poked through.

She trailed her hand down then beneath his shirt to tickle the hair on his belly before playing at his belt. Her bare breasts squished into his back as she held his gaze in the mirror

“You’re definitely man enough for me.”

She cupped him between his thighs, her palm pressing hard to the thickening head of his clit. It grew bigger as she ground her hand into him, wetness seeping to wet his jockeys as his hips moved in tandem.

His cheeks heated as her other hand disappeared and he felt her knuckles bump his ass as she fingered herself.

“No.” He reached for her hand, drawing it around so he could bring her fingers to his mouth to suck. “Naughty girl.”

He lead her around to the side of the bed, pushing at her shoulders so she leaned down. She turned her head to face the mirror as he smacked her ass in quick succession. Placing a staying hand on her back, he slid to fingers deep in her cunt. The way her lips parted on a gasp as he finger fucked her made his clit grow bigger.

Leaving her there, he stepped out into the kitchen to find the spatula he liked to use on her. He made to grab it when something outside caught his eye. A tree branch in the backyard had fallen. It was the same size as the crop she liked used on her sometimes. Perfect. He darted outside, ignoring his own clit throbbing in his pants as he stripped the leaves off the branch. When he returned, she lay just where he left her.

She complied instantly, turning to wait for his command. He dropped his pants, pushed down his jockeys, parted his thighs, and spread his labia so his clit stood out. It had grown thick over the last few month and being aroused made it big enough to jerk.

Watching her move toward him, her ass up and ready as she swooped in to give him head. He nearly dropped his new implement as that pleasure engulfed him. Collecting himself, he took careful aim at the lovely target and landed one strike. She paused in her sucking to gasp.

He landed another to encourage her one, enjoying the way she sucked harder at him.